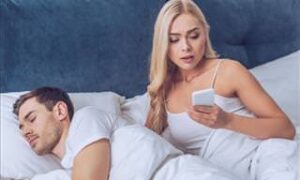 Ted comes home blackout drunk, as he does most nights.

With his eyes barely open, he misses his friend Carl in bed on top of his wife.

He lies down and instantly passes out.

Carl panics and tries to run but the wife stops him and whispers: “Don’t go, this moron is so drunk he won’t even feel me plucking a hair on his butt.”

The wife does exactly that and the husband doesn’t move.

Carl, now reassured, proceeds with the job. Half an hour later Ted moves a bit, and Carl is just about to freak out, the wife stops him and plucks another hair from his buttocks.

Another hour later Carl is still going at it.

After a while, just to be sure, he plucks another hair from Ted’s butt.

Ted then moves around a bit and mumbles: “Look man, I don’t mind you screwing my wife, but do you really need to keep score on my bum?”