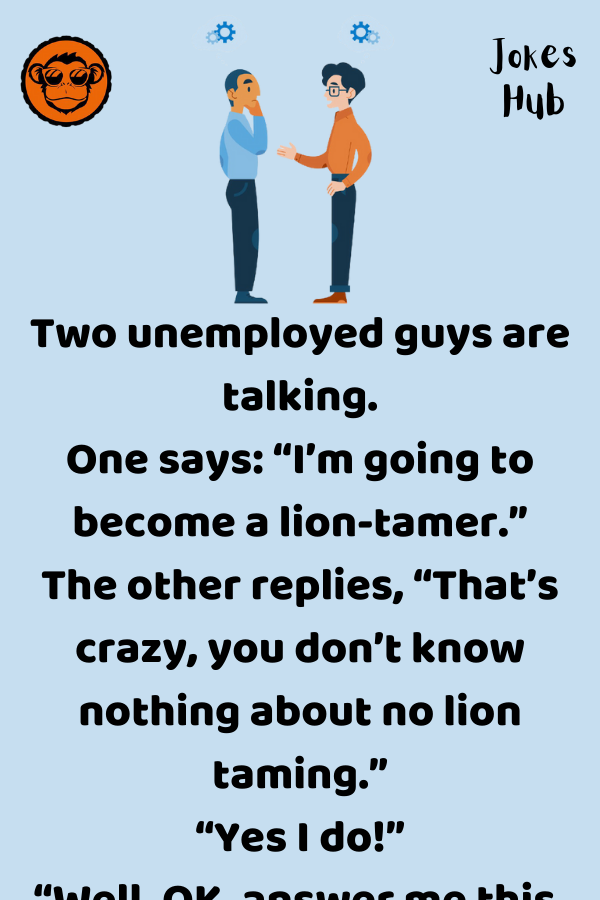 One says: “I’m going to become a lion-tamer.”

The other replies, “That’s crazy, you don’t know nothing about no lion taming.”

“Well, OK, answer me this. When one of those lions comes at you all roaring and biting, what you gonna do?”

“I’ll take that big chair they all carry, and I’ll stick it in his face until he backs down.”

“Well, what if the lion takes that big paw, and hooks the chair with those big claws, and throws that chair out of the cage? What do you do then?”

“I’ll take that whip they all carry, and I’ll whip him and whip him until he backs down.”

“Well, what if that lion bites that whip with his big teeth, and bites it in two? What you gonna do then?”

“I’ll take that gun they all carry, and shoot him.”

“Well, what if that gun doesn’t work? What will you do then?”

“I’ll pick up whatever’s on the bottom of the cage, and I throw it in his eyes, and I run out of the cage.”

“Well, what if there ain’t nothin’ on the bottom of the cage? What you gonna do then?”

“You ain’t thinkin’ none to clear – cause if that lion comes at me, and he throws the chair out of the cage, and he bites the whip in two, and my gun doesn’t work, there’s going to be SOMETHING at the bottom of that cage.

You can bet on that!”