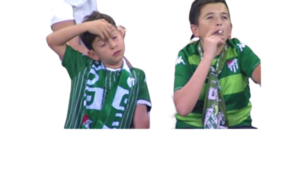 They played for charities supporting kids with down syndrome, autism, and leukaemia.

As the game was intended to help children, the camera crews did their best too.

They tried to pick out the children in the crowd, so they could watch back on the telly and be proud of themselves.

Imagine going into school the next day and everyone being so jealous!

However, this became a problem when one child started smoking.

There was an immediate response from fans, many of whom wrote in.

It caused quite a stir on social media, too.

People were asking the whereabouts of the child and were genuinely concerned for his safety.

However, it turned out that the “child” in question was a 36-year-old man! He had taken his son to the game and was mistaken for a child.

His age is a little clearer in the photo below: