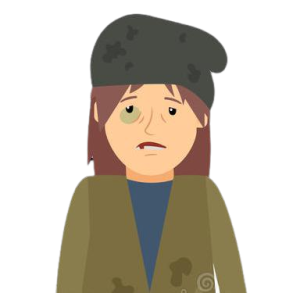 A woman was walking down the street when she was accosted by a homeless woman who asked her for a couple of dollars for dinner:

The woman took out her wallet, extracted ten dollars and asked

“If I give you this money, will you buy some wine with it instead of dinner?”

“No, I had to stop drinking years ago.” The homeless woman replied.

“Will you use it to go shopping instead of buying food?” The woman asked.

“No, I don’t waste time shopping.” The homeless woman said

“I need to spend all my time trying to stay alive.”

“Will you spend this on a beauty salon instead of food?” The woman asked.

“Are you NUTS?” Replied the homeless woman

“I’m not going to give you the money

Instead, I’m going to take you out for dinner with my hubby and myself tonight.”

The homeless Woman was astounded

“Won’t your husband be furious with you for doing that? I know I’m dirty, and I probably smell pretty disgusting.”

It’s important for him to see what a woman looks like after she has given up shopping, hair appointments and wine.”

A Teacher Was Asking Her Class

Judy and Ted got married and had 13 children