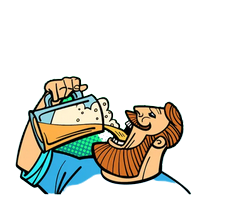 A Queenslander is drinking in a West Australian Pub when he gets a call on his mobile phone and as he listens to the call he starts grinning from ear to ear.

Once he disconnects he shouts to the barman that he wants to buy everyone in the bar a drink.

The barman starts serving the drinks and the people start to crowd around, keen to know what they are celebrating.

Nobody can believe that any baby can weigh in at 25 pounds, but the Queenslander just shrugs, “That’s about average in Queensland. Like I said, my boy is a typical Queensland boy.”

Congratulations showered him from all around and many exclamations of “strewth” were heard. One woman even fainted due to sympathy pains.

Two weeks later the Queenslander returns to the bar.

The barman says “You’re the father of that typical Queensland baby that weighed 25 pounds at birth aren’t you? Everybody’s been having bets about how big he’d be in 2 weeks, we were going to call you. So – how much does he weigh now?”

The bartender is puzzled and concerned.

“What happened? He weighed 25 pounds the day he was born!”

The Queensland father takes a l-o-n-g s-l-o-w swig from his XXXX Gold beer, wipes his lips on his shirt sleeve, leans onto the bar and proudly says,