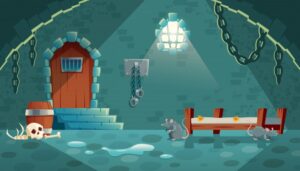 Every day, we are assaulted by stories of stupid people — many of whom use their stupidity for personal gain.

From time to time, though, we hear of those who strive to achieve new levels of stupidity *while* also breaking the law.

To these brave men and women — ooops, “women and men” — we present the highest possible honor: entry into the “Stupid-Criminal Hall of Shame.”

Following are their accounts ..

Kentucky (where else?): Two men tried to pull the front off a cash machine by running a chain from the machine to the bumper of their pickup truck.

Instead of pulling the front panel off the machine, though, they pulled the bumper off their truck.

Scared, they left the scene and drove home.

With the chain still attached to the machine.

With their bumper still attached to the chain.

With their vehicle’s license plate still attached to the bumper.

South Carolina: A man walked into a local police station, dropped a bag of cocaine on the counter, informed the desk sergeant that it was substandard cut, and asked that the person who sold it to him be arrested immediately.

Indiana: A man walked up to a cashier at a grocery store and demanded all the money in the register.

When the cashier handed him the loot, he fled–leaving his wallet on the counter.

England: A German “tourist,” supposedly on a golf holiday, showed up at customs with his golf bag. While making idle chatter about golf, the customs official realized that the tourist did not know what a “handicap” was.

The customs official asks the tourist to demonstrate his swing, which he does–backward! A substantial amount of narcotics were found in the golf bag.

Germany: Oil of Olay no longer turning the trick for her, a woman decided that she would bathe in the milk of a camel (a modern-day Cleopatra).

So she stole a camel from the local zoo (where *else* can you find a camel when you need one?) and transported it back to her house–where she realized that the camel’s name was “Otto.”

One day, they received a call from a 47-year-old woman who wanted to have her husband killed.

Texas: A man convicted of robbery worked out a deal to pay $9600 in damages rather than serve a prison sentence.

For payment, he provided the court a check–a *forged* check. He got 10 years.

(Location Unknown): A man went into a drug store, pulled a gun, announced a robbery, and pulled a Hefty-bag face mask over his head–and realized that he’d forgotten to cut eyeholes in the mask.

(Location Unknown): A man successfully broke into a bank after hours and stole–are you ready for this?–the bank’s video camera.

While it was recording. Remotely. (That is, the videotape recorder was located elsewhere in the bank, so he didn’t get the videotape of himself stealing the camera.)

(Location Unknown): A man successfully broke into a bank’s basement through a street-level window, cutting himself up pretty badly in the process.

He then realized that

(1) he could not get to the money from where he was,

(2) he could not climb back out the window through which he had entered, and

Virginia: Two men in a pickup truck went to a new home site to steal a refrigerator.

Banging up walls, floors, etc., they snatched a refrigerator from one of the houses, and loaded it onto the pickup.

The truck promptly got stuck in the mud, so these brain surgeons decided that the refrigerator was too heavy.

Banging up *more* walls, floors, etc., they put the refrigerator BACK into the house and returned to the pickup truck only to realize that they locked the keys in the truck–so they abandoned it.

(Location Unknown): A man walked into a Circle-K (a convenience store similar to a 7-11), put a $20 bill on the counter and asked for change.

When the clerk opened the cash drawer, the man pulled a gun and asked for all the cash in the register, which the clerk promptly provided.

The man took the cash from the clerk and fled, leaving the $20 bill on the counter.

The total amount of cash he got from the drawer? Fifteen dollars.

An Old Woman Needing To Use The Restroom