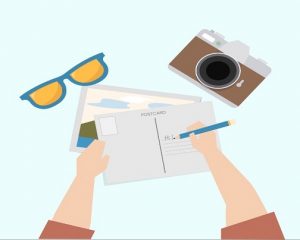 A letter an 83-year-old lady wrote to her grandson.

Some days ago, I experienced something wonderful, which I want to share with you.

I went to a religious shop and found a car sticker saying: “Honk if you love God!”

I decided to buy it and stick it on the bumper of my car.

When I went away, I was in the rush hour. Almost 100 degrees outside.

I was at a very busy crossroads, with lots of traffic.

I stopped there, as the traffic light was red, and I decided to thank God for everything he gave me.

Although I didn’t realize that the traffic light had turned green, I found out that there were a lot of people who loved God, because they began to honk… It was wonderful!

The man in the car behind me was, for sure, very religious, as he was honking repeatedly and shouting “For the love of God!”.

Just like him, a lot of people began to honk as well.

I happily smiled and waved, with my hand out of the car window.

I also noticed that a guy behind me was waving in a very special way, pointing his middle finger at me.

I asked your cousin Alex, who was with me, what that gesture meant.

He told me it was a “Hawaiian salutation”, to wish good luck!

So I began to greet everyone the same way.

Alex was laughing a lot, probably because of the marvelous religious experience he was going through.

Two men got out of their car and walked toward ours.

But then I realized that the traffic light was green!

I greeted my brothers and sisters with my Hawaiian salutation and moved forward.

However, I also noticed that my car was the only one that moved, as the light turned red after that.

I felt bad for leaving my beloved brothers and sisters behind after we shared so much love.

I stopped, got out of the car, and did my Hawaiian salutation for the last time.

Don’t forget to thank God from the bottom of your heart when you go through something wonderful, such as this marvelous experience I had with all these men and women.

An Old Man Goes To A Restaurant