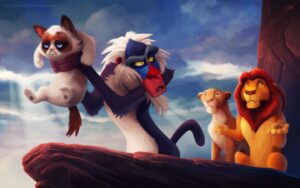 A monkey walks up to the lion and starts taunting him.

“You stupid j*rk! You cannot do anything to me”,

The lioness looks at the lion hearing that and gets surprised by his lack of reaction.

The monkey goes on “Imma f*ck your momma you stupid lion!”,

The lion keeps ignoring the monkey, so the lioness asks

“honey, are you going to allow this peasant to disrespect you? Aren’t you the king of the jungle? Do something…”,

“Just ignore him,” says the lion

” he’s just a stupid monkey that isn’t worth our time”.

“Yesterday I f*cked your wife real good and she liked it!” shouted the monkey.

“That’s it,” said the lioness

“I’ll teach him a lesson and then we’ll have a serious talk about self-respect” and went after the monkey who started swinging from a tree to the next.

“gotcha,” said the lioness as she pounced towards the monkey, who actually was waiting for this to happen, his small size allowed him to get through the hole, while the lioness got stuck.

He swung behind her and f*cked her to his heart’s content with a dirty smile on his face.

That evening the lioness returned to her home silent, and when she saw the lion she said:

“you were right, I shouldn’t have let that peasant’s taunting get to me”…

The lion hugged her understandingly and said

A man meets woman at a bar

A Woman Was In Bed With Her Lover