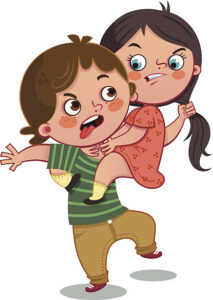 Little Johnny and his 13-year-old sister had been fighting a lot.

This happens when you combine a headstrong two-year-old with a young adolescent.

Johnny’s parents, trying to take advantage of his newfound interest in Santa Claus, reminded the two-year-old that Santa was watching and doesn’t like it when children fight.

However, this had little impact.

“I’ll just have to tell Santa about your misbehaviour,” the mother said as she picked up the phone and dialled.

“Mrs Claus” (really Johnny’s aunt) if she could put Santa on the line.

Little Johnny’s mouth dropped open as his mum described to Santa (really Johnny’s uncle) how the two-year-old was acting.

When his mum then said that Santa wanted to talk to him, he reluctantly took the phone.

Santa, in a deepened voice, explained to him how there would be no presents Christmas morning for children who fought with their sisters.

He would be watching, and he expected things to be better from now on.

Little Johnny, now even more wide-eyed, solemnly nodded to each of Santa’s remarks and silently hung up the phone when he was done.

After a long moment, his mum, who at this point was holding in her chuckles at being so clever, asked Johnny,
“What did Santa say to you, dear?”

In almost a whisper, Little sadly but matter-of-factly stated,

“Unfortunately, Santa said he won’t be bringing toys to my sister this year.”

A Lady Was In A Pet Store

The 92-Year-Old Lady Moved To A Nursing Home