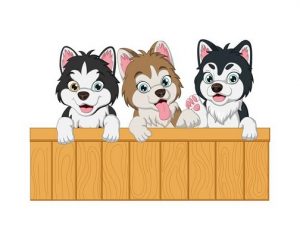 They are sitting in the waiting room talking about why they are there.

The first one tells the others, “Well, it’s so sad, I’m here because I bit my owner’s hand.

I’m so sorry about it, but still they want me to be euthanized.”

The second one tells a similar story, “Yeah, I feel you, man. I bit my owner’s bum.

I tried to apologize, but they wouldn’t listen. I’m also here to be euthanized.”

The third starts telling his story, “Well, it’s a longer story… One day I went up the stairs into my owner’s bathroom.

She had just been taking a shower. I usually am not allowed to go there but my curiosity got the best of me.

I entered the room and that’s when I saw her, my owner, full n***ked, crawling on the floor, wiping up the water from the shower, giving me a perfect view.

It was so inviting that I couldn’t hold back. I jumped on her and had the time of my life with her…”

“Aww, that’s so sad. Now she’ll have you euthanized as well, I guess?” said the second dog.