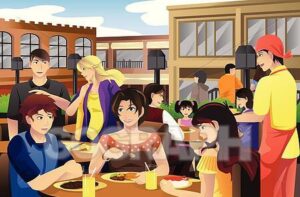 An american was touring Mexico.

After his day’s sight-seeing, he stops at a local restaurant.

While sipping his wine, he notices a sizzling, scrumptious looking platter being served at the next table.

Not only it looked good, but the smell was wonderful.

He asked the waiter, “What was that you just served the gentleman at the next table?”

The waiter replied, “Ah, senor, you have excellent taste! Those were the bull’s testicles from the bull-fight this morning. A delicacy!”

The American was momentarily daunted when he learnt the origin of the dish.

But then he said, “What the hell? I am on vacation! Bring me an order!”

If you come early tomorrow and place your order, you will be sure to have this delicacy!”

The next morning, the American returned, placed his order, and was served the one and only special delicacy of the day.

After a few bites, he called the waiter and said,

“These are smaller than the ones I saw you serve yesterday!”

The waiter replied, “Si, senor, I know. But sometimes the bull wins.”

Man looks at his friend