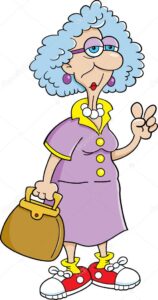 A lady gives herself a treat for her 7pth birthday

A lady decided to give herself a treat for her 70th birthday by staying overnight in an expensive hotel.

When she checked out next morning, the desk clerk handed her a bill for $500.

She exploded, demanding to know why the charge was so high. The clerk told her $500 was the standard rate.

So she insisted on speaking to the manager.

The manager appeared, and was filled in.

“This hotel has an Olympic-sized pool, a gymnasium, a sauna and a huge conference centre, which are all available for use,” he said.

“But I didn’t use them,” she protested. ” Well, they are here, and you could have,” he explained.

He went on to explain she could also have seen one of the in-hotel shows for which the hotel was famous.

“But I didn’t go to any shows,” she protested again.

“Well, you could have,” the manager replied.

Since the manager would not be moved, she wrote out a cheque and handed it over.

“But I didn’t!” exclaimed the very surprised manager. ”

A woman was pregnant