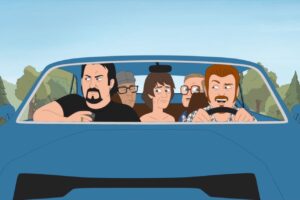 Three drunken guys entered a taxi after a heavy night of drinking.

Immediately realizing that the men were inebriated,…

Cab driver quickly thought up a plan to get rid of them.

He started the engine, turned it off again and said:

“We have reached your destination”.

Said the first guy as he gave him the money.

The second guy thanked him enthusiastically.

The third guy slapped him across the face with brute force.

“What was that for?”

Yelled the surprised driver, thinking he was caught.

“Next time don’t go so fast! You nearly killed us!”