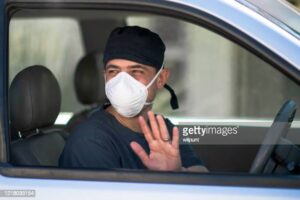 A doctor drives by a small town.

He stops at a gas station & notices there is no one there.

A little kid passes by & tells him the gas station is closed because everyone is a the funeral of the owner’s daughter.

Since he was out of gas, he decided to stay for the night & goes to the funeral

When he gets there he goes in & looks at the open casket & notices that something is wrong.

He calls the father

Sir, I’m a doctor & I can assure you she is not dead, she is in a catatonic sleep.”

“What do we do now?” asks the father.

“Does she have a boyfriend?”, asks the doctor.

“Take her to a room & have the boyfriend have s*x with her.”

They do as the doctor said & sure enough, she wakes up.

Everybody was happy & the doctor leaves once he fills up his gas tank.

A few months go by & the doctor returns to the same gas station.

The same kid greets him again,

“Doctor, it is so great to see you again.

About a week ago Mrs. Edward died.

Half of the town has screwed her already but she is just not waking up.”

Timmy wanted to sleep with his parents

Rubbing a toilet paper between your fronts