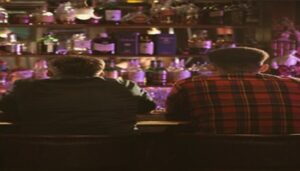 Queensland farmers, Jim and Bob, are sitting at their favourite bar, drinking beer.

Jim turns to Bob and says, “You know, I’m tired of going through life without an education.

Tomorrow I think I’ll go to the community college, and sign up for some classes.”

Bob thinks it’s a good idea, and the two leave.

The next day, Jim goes down to the college and meets Dean of Admissions, who signs him up for the four basic classes: Maths, English, history, and Logic.

The dean says, “I’ll give you an example. Do you own a whipper snipper?”

“Then logically speaking, because you own a whipper snipper, I think that you would have a yard.”

“Because you have a yard, I think logically that you would have a house.”

“And because you have a house, I think that you might logically have a family.”

“I am a heterosexual. That’s amazing, you were able to find out all of that because I have a whipper snipper.”

Excited to take the class now, Jim shakes the Dean’s hand and leaves to go meet Bob at the bar.

He tells Bob about his classes, how he is signed up for Maths, English, History, and Logic.