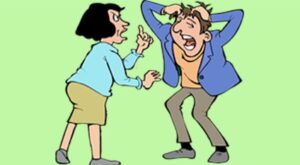 A Hindu saint who was visiting river Ganges to take bath found a group of family members on the banks, shouting in anger at each other.

He turned to his disciples smiled and asked.

“Why do people in anger shout at each other?”

Disciples thought for a while, one of them said, “Because we lose our calm, we shout.”

“But, why should you shout when the other person is just next to you?

You can as well tell him what you have to say in a soft manner.” asked the saint.

Disciples gave some other answers but none satisfied the other disciples. Finally the saint explained,

“When two people are angry at each other, their hearts distance a lot.

To cover that distance they must shout to be able to hear each other.

The angrier they are, the stronger they will have to shout to hear each other to cover that great distance. What happens when two people fall in love?

They don’t shout at each other but talk softly, Because their hearts are very close.

The distance between them is either nonexistent or very small…”

The saint continued, “When they love each other even more, what happens?

They do not speak, only whisper and they get even closer to each other in their love.

Finally they even need not whisper, they only look at each other and that’s all.

That is how close two people are when they love each other.”

He looked at his disciples and said;

“So when you argue do not let your hearts get dıstant, do not say words that dıstance each other more, or else there wıll come a day when the dıstance ıs so great that you wıll not fınd the path to return.”

Think twice before you open your mouth!