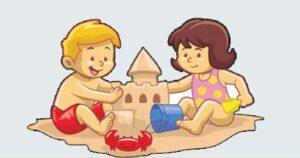 I was sitting on a beach one summer day, watching two children, a boy and a girl, playing in the sand.

They were hard at work building an elaborate sandcastle by the water’s edge, with gates and towers and moats and internal passages.

Just when they had nearly finished their project, a big wave came along and knocked it down, reducing it to a heap of wet sand.

I expected the children to burst into tears, devastated by what had happened to all their hard work. But they surprised me.

Instead, they ran up the shore away from the water, laughing and holding hands, and sat down to build another castle.

I realized that they had taught me an important lesson.

All the things in our lives, all the complicated structures we spend so much time and energy creating, are built on sand. Only our relationships to other people endure.

Sooner or later, the wave will come along and knock down what we have worked so hard to build up.

When that happens, only the person who has somebody’s hand to hold will be able to laugh.