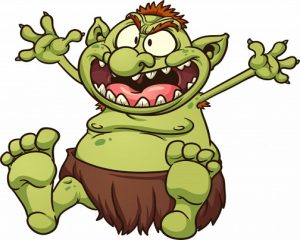 One day a man was walking through the forest when he encountered a goblin.

The goblin shouted at the man and said: “Foolish mortal, you trespass on sacred grounds! You know not the danger that hides within these hallowed woods!”

The man happened to be Neil de Grasse Tyson, famed astrophysicist and general man of science.

Neil responded simply, “This is a public park,” and to that the goblin let out an exasperated gasp and retorted, “Well, I have a magical patch of dirt. I swore on my life to protect it.”

Neil, bemused, responded, “This is public property, you can’t own any of it.”

“BUT IT’S MINE! THE PATCH OF DIRT IS MINE!” The goblin screeched back, his voice devolving into a hiss.

“You, human, should not be able to pass these defenses, but, if you do… and you THREATEN MY PATCH OF DIRT, then… I will CURSE YOU!”

The goblin disappeared suddenly as Neil dwelled upon the goblin’s choice of words, musing the word “defenses” repeatedly as he continued his walk through the forest.

Eventually, Neil came across a wall, stretching for miles and spanning the entire woods.

The wall was made of burning bricks, unnaturally luminous and searing to the touch.

Neil realized that the goblin was serious and this was the first defense he had laid.

The wall was designed to be impassible but Neil overcame the obstacle with ease, as the wall was impassible only to goblins and was short enough for an average sized human to step over.

Neil continued for another mile before reaching the next defense.

This time, it was a deep chasm stretching for miles, cursed so anything that dipped below ground level would freeze instantly, and so unthinkably deep that anything that fell in would surely shatter at the bottom.

The chasm was designed to be impassible but Neil overcame the obstacle with ease, as the chasm was impassible only to goblins and was narrow enough for an average sized human to step across.

The Frog And The Engineering Student