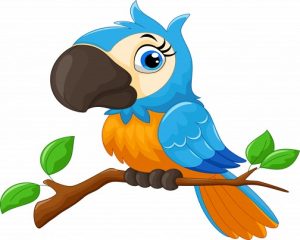 There was a little old lady who was nearly blind.

She had three sons and they wanted to prove which one was the best son to her.

So son #1 bought her a 15-room mansion thinking this would surely be the best any of them could offer her.

Son #2 bought her a beautiful Mercedes with a chauffeur included thinking he would surely win her approval.

Son #3 had to do something even better than these so he bought her a trained parrot.

This parrot had been trained for 15 years to memorize the entire Bible.

You could mention any verse in the Bible and the parrot could quote it word for word.

How useful his nearly blind mother would find that!

Well, the old lady went to the first son and said, “Son, the house is just gorgeous but it’s really much too big for me.

I only live in one room, and it’s much too large for me to clean and take care of.

I really don’t need the house, but thank you anyway.”

Then she explained to her second son, “Son, the car is beautiful, it has everything you could ever want on it, but I don’t drive and I really don’t like that driver, so please return the car.”

Next, she went to son number three and said, “Son, I just want to thank you for that thoughtful gift.

The chicken was small, but delicious.”