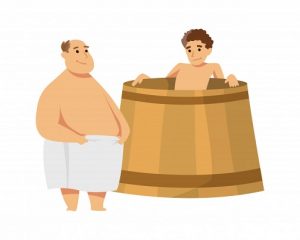 Three men, one German, one Japanese, and a hillbilly were sitting n*ked in a sauna.

Suddenly there was a beeping sound.

The German pressed his forearm and the beeping stopped, he said: I have a microchip under the skin of my arm.

The Japanese fellow lifted his palm to his ear, when he finished he explained: That was my mobile phone, I have a microchip in my hand.

The hillbilly felt decidedly low tech, but not to be outdone he decided he had to do something just as impressive.

He stepped out of the sauna and went to the bathroom.

Having returned with a piece of toilet paper hanging from his behind.

The others raised their eyebrows and stared at him.

The hillbilly finally said… Well would you look at that I’m getting a fax!

The Importance of Walking

Woman Discusses Divorcing Her Husband With A Lawyer