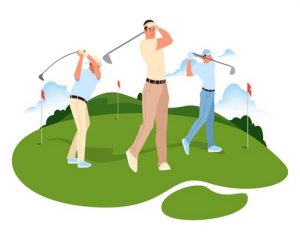 Four guys are playing golf together and talking about how successful their sons are.

The first says, “My son is so successful, he’s VP of his company and just gave his best friend a car. “

The second says, ” That’s nothing, my son is CEO of his company and just gave his best friend a house.”

They look expectantly at the last guy who says, “My son is a gay escort who gets showered with love and admiration.

He just got a car, a house, and a jet from three of his clients.”