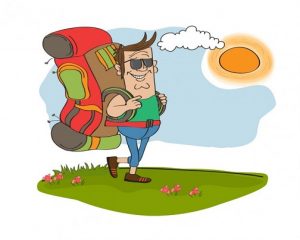 Two hikers were walking through central Pennsylvania when they came upon a 6 foot wide hole in the ground.

They figured it must be the opening for a vertical air shaft from an old abandoned coal mine.

Curious as to the depth of the hole, the first hiker picked up a nearby rock and tossed it into the opening.

They listened… and heard nothing.

The second hiker picked up an even larger rock and tossed it into the opening.

They listened… and still heard nothing.

Then they both picked up an old railroad tie, dragged it to the edge of the shaft, and hurled it down.

Seconds later a dog came running up between the two men and jumped straight into the hole.

Bewildered, the two men just looked at each other, trying to figure out why a dog would do such a thing.

Soon a young boy ambled onto the scene and asked if either man had seen a dog around here.

The hikers told him about the dog that had just jumped into the hole.

The young boy laughed and said, “That couldn’t be my dog. My dog was tied to a railroad tie!”

A Woman Has A Vision Of God