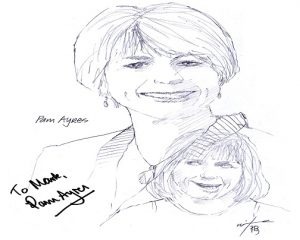 The missus bought a Paperback, down Shepton Mallet way, I had a look inside her bag;… T’was “Fifty Shades of Grey”.

Well I just left her to it, And at ten I went to bed.

An hour later she appeared; The sight filled me with dread.

In her left hand she held a rope; And in her right a whip! She threw them down upon the floor, And then began to strip.

Well fifty years or so ago; I might have had a peek; But Mabel hasn’t weathered well; She’s eighty four next week!! Watching Mabel bump and grind; Could not have been much grimmer.

And things then went from bad to worse; She toppled off her Zimmer! She struggled back upon her feet; A couple minutes later; She put her teeth back in and said “I am a dominator!!”

Now if you knew our Mabel, You’d see just why I spluttered, I’d spent two months in traction For the last complaint I’d uttered.

She stood there undressed Bent forward just a bit I went to hold her, sensual like and stood on her left tit!

Mabel screamed, her teeth shot out; My God what had I done! She moaned and groaned then shouted out:

“Step on the other one!!” Well readers, I can tell no more; Of what occurred that day.

She Runs Crying Into The Office

A Blonde Went To Her Doctor