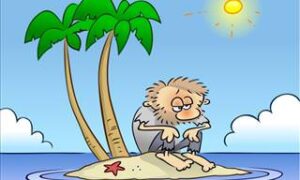 A man travels on a ship. Two days in, the ship encounters a storm and drowns.

Hanging on weakly to a piece of the mast, he manages to survive and gets washed up on an unknown island.

Only problem is, it’s so unknown that no ship ever comes near it.

10 years pass on the island, and the survivor has been alone all this time, that is until one day, he suddenly notices an unusual speck in the distance.

“It’s certainly not a ship,” he thinks to himself.

No ship has ever come. As the speck gets closer and closer the man starts to rule out the possibility that it’s a small boat or even a raft.

Suddenly, emerging from the surf is a beautiful blonde woman wearing scuba gear and a wet-suit.

She approaches the man, who can’t believe his eyes.

She tells him she has a boat nearby, and she just took a swim.

The look of the poor man makes her feel a great wave of pity for him. “Tell me, how long has it been since you’ve had a cigarette?” she asks the man.

“It’s been 10 years,” he replies. With that, the woman reaches over and unzips a waterproof pocket on her left sleeve and pulls out a packet of cigarettes.

The man takes one, lights it and takes a long drag.

“Man, that is good!” he says, sighing in pleasure. “And how long has it been since you’ve had a sip of bourbon?” the woman asks.

Trembling, the castaway explains that it’s also been 10 years.

Sure enough, the woman reaches over, unzips her right sleeve and pulls out a flask.

The man opens it and takes a swig. “This is the best day of my life,” he says, grinning.

The woman starts unzipping her long zipper that runs down the front of her wetsuit and looks at the man seductively.

“Now, how long has it been since you’ve had some real fun?” she asks seductively.

With tears in his eyes, the man falls to his knees and sobs.

“Dear lord! Don’t tell me you’ve got a game of twister in there!”

An Italian Under Interrogation