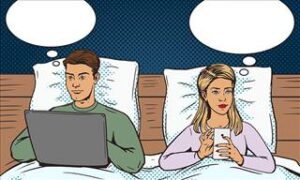 A young couple is finally wed. Each one is nervous about the impending night, but neither is willing to admit it or ask each other about it.

Wondering what to do first, the young man calls his father.

“Pop, what do I do first?” “Get undressed and climb into bed,” his father replies. So, the young man does as he is advised.

The girl is mortified and calls her mama. “Get undressed and join him,” is the advice from mama, so she complies.

After laying there for a few moments, the young man excuses himself and calls his dad again.

“Now what do I do?” he asks. His father replies, “Look at her body.

Then, take the hardest part of your body and put it where she pee!” is the dad’s advice.

A few moments later, the girl again calls her mama.

“He’s in the bathroom, dunking his head in the toilet!”

Why Fishing is Better Than Dating

Two Stupids Chase After An Indian