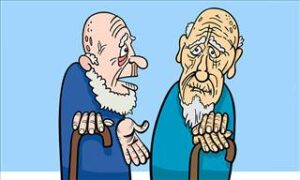 Two elderly gentlemen, who had been without enjoyment for several years, decided they needed to visit a cat-house for some tail.

When they arrived, the madam took one look at them and decided she wasn’t going to waste any of her girls on these two old men.

She used “blow-up” dolls instead. She put the dolls in each man’s room and left them to their business.

After the two men were finished, they started for home and got to talking.

The first man said, “I think the girl I had was dead.

She never moved, talked or even groaned… how was it for you?”

The second man replied, “I think mine was a w**tch.”

The first man asked, “How’s that?” “Well,” said the second man, “when I bite on her nips… she farted and flew out the window!”

A couple arrived at town hall seconds before closing