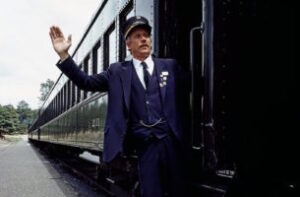 A businessman rushed into the train station just in time to catch the New York to Washington Express.

On taking his seat he asked the conductor what time the train reached Philadelphia.

“There’s no stop in Philly on Wednesdays,” replied the conductor.

“What!” Exclaimed the businessman.

“There’s no stop in Philadelphia on Wednesdays.”

I have an important meeting there.”

The conductor is adamant.

“This is the weekly express service and there’s no stop in Philly on Wednesdays.”

After much argument a compromise was reached.

The conductor agreed to ask the driver to slow down to 60 kilometres an hour as the train went though Philadelphia.

He would then hold the businessman out of the carriage window, the businessman could get his legs running in thin air as fast as he could and when the conductor thought his leg speed was sufficient he would lower him down onto the platform.

So when the train reached Philly this plan was put into action and the businessman hit the platform running at full speed.

He ran the full length of the platform, hoping he could stop himself before the end.

Just as the last carriage of the train was passing him by, his collar was grabbed by the strong arm of a coal miner who heaved him back on-board through an open window.

“Welcome aboard, buddy,” said the miner, “You were lucky I grabbed ya, there’s no stop in Philly on Wednesdays.”

One professor of mathematics noticed that his kitchen sink

A poor peasant is travelling the woody