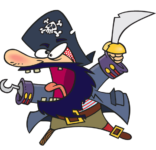 A sailor is recruited onto a Pirate ship.

After swearing loyalty to the Captain and crew, and receiving his daily list of duties, the new recruit is brought up onto the poop deck to briefly meet the Captain.

The Captain, a rugged-looking pirate with a peg leg, a hook for a hand, and an eye-patch, is an intimidating-looking man indeed.

“Yarr, welcome aboard! Good to have you,” The Captain tells the recruit. “Do ye have any questions for me?”

“Well I was wondering…” the recruit started. “How did you get the peg leg?”

“Arr, my leg was blown off by a cannonball during a naval battle. Any other questions, landlubber?”

“Well how did you get the hook then?” the recruit asked.

The Captain grimaced. “My hand was cut off by a sword in a terrible battle. Luckily I had a shot in me pistol… I hit him square in the eyes and dropped him dead.”

Impressed, the recruit asked the Captain one more question: “How did you get the eye-patch?”

The Captain looked down, embarrassed. “A seagull pooped in me eye,” he stated coldly.

The recruit seemed surprised. “A seagull? That doesn’t seem like it would cause you to lose your eye. Did it get infected?”

“No,” the Captain started.

“It was the day after I got me hook…”

A man in New Orleans walked

A teenage boy goes to church